3 months ago, I moved to a new part of Paris. Whereas I used to live atop a northern station of line 4, one of the busiest underground lines in Paris, I now live closer to the suburbs, a 10 minutes walk from the closest tube station on line 10 - and much further away from my office.
To alleviate this, I initially considered buying a light motorbike... that is, until I got to try an electric scooter.
Though I couldn’t have foreshadowed it, my move took place at a fortuitous time, coinciding with the arrival in town of 2 providers of electric scooter: Bird and Lime.
Observation 1: this s**t is real
I initially thought that using an electric scooter would feel like an amusement. After riding Bird & Lime about 10 times, I have to admit: this stuff really works. The learning curve is seemingly non-existent, riding feels natural and safe (I’m used to biking in Paris - the same precautions apply).
Observation 2: once you get started, it’s hard to stop
This is true in 2 ways: once you get used to the service, it makes you want to use it again (see also observation 5 below). Beyond this, once you’re on a scooter or bike, you tend to want to stay there. Yesterday, an 8-minutes, 2km ride meant to take me to the tube station turned into a 30-minutes, 8km ride to my final destination. The weather was good, the experience pleasant... why bother getting back into an underground station?
Since you pay by the minute, this has a direct positive impact on revenue for the scooter companies.
Observation 3: electric scooter > bike
This morning, after missing my bus, I decided to take a scooter. Bad luck, none was available in my area. I fell back on a Mobike. Though my ride was pretty short (less than 15 minutes), that was enough to get sweaty. This was further compounded by a 20-minutes ride in a crowded underground wagon.
Sweat is obviously not a concern with electric scooters. Electric bikes live in a middle ground there, since they still require you to pedal in order to move forward.
Observation 4: multi-modality FTW!
I end up switching a lot more between various modes of transportation: bus to tube, scooter to tube, bike to tube... though, interestingly, rarely the other way round.
Some services, such as CityMapper, are trying to seize the opportunity by offering ride itineraries that include bike and scooter options. However, their solution does not take hops such as scooter-to-tube-to-bike into account yet. You still have to do some mental calculations to find out whether taking a scooter to the tube could be faster than the standard bus-to-tube connection offered by the app.
Observation 5: free billboards all over town
I’d wager that one of the key factor of the rapid success of micro-mobility companies is their ability to keep customer acquisition and retention costs low thanks to their almost permanent presence in the background.
Several times, while intending to take the bus, I stumbled upon a bike/scooter parked next to the stop. In the frequent cases where the bus was more than 5 minutes away, this prompted me to take a scooter.
—
Electric scooters are not quite there yet. I’m finishing this article while waiting for a bus that is still 8 minutes away: unfortunately, the only scooter close to me has no battery left... 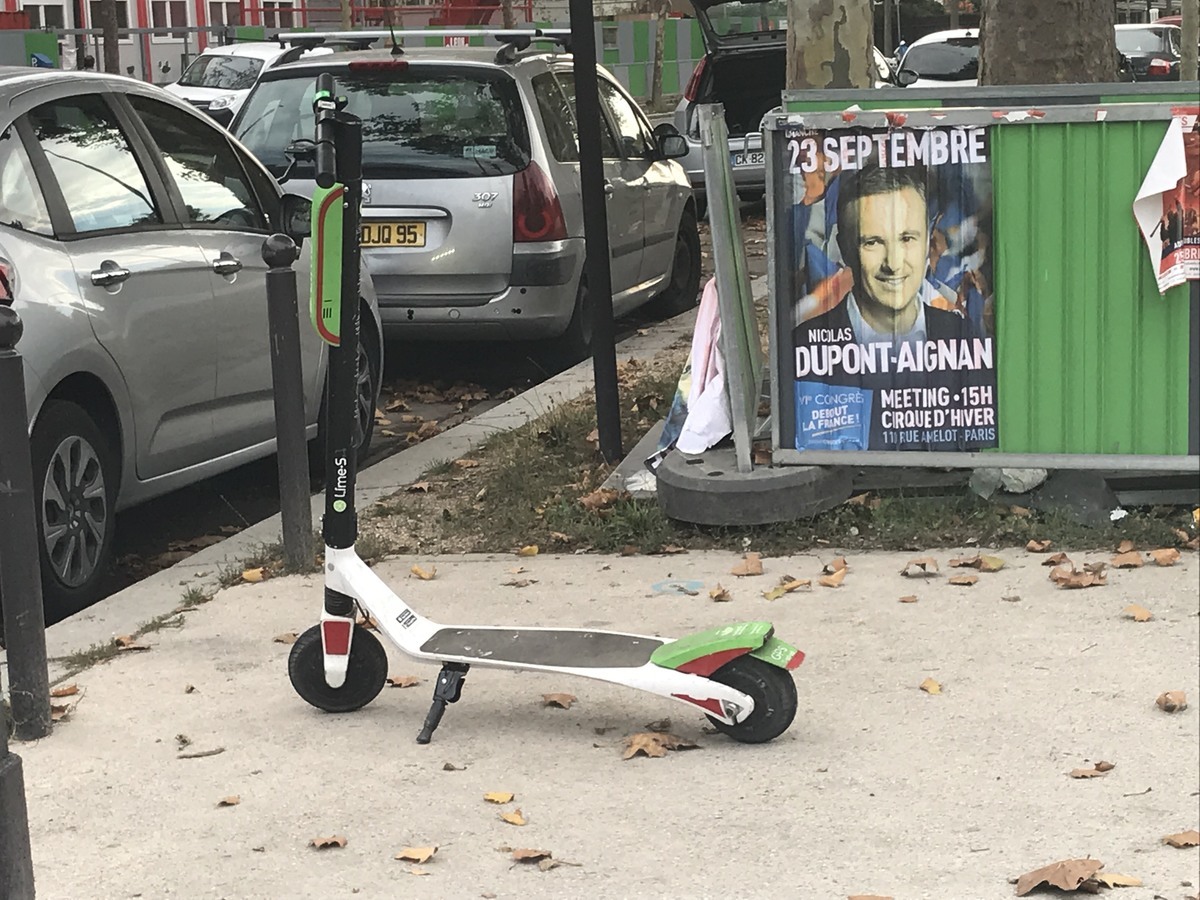