Among any set of groups, almost all the groups think their group is delivering more and other groups are delivering less. In a company with many groups, managers generally believe their group as a whole is performing better by relevant measures and thus should not be held to the same distribution or should have a larger budget. Groups tend to believe their work is harder, more strategic, or just more valuable while underestimating those contributions from other groups.

A must-read for anyone who'll have to tweak or implement a performance review system in the context of their work.

The longest string of dependent, non-compressible tasks is the critical path.
[...]
Critical path analysis works backward, looking at the calendar and success and at each step from the end to the start, determining what you'll be waiting on.
[...]
Yet most organizations focus on shiny objectives or contentious discussions or get sidetracked by emergencies instead of honoring the critical path.

From http://sethgodin.typepad.com/seths_blog/2013/11/understanding-critical-path.html
It applies very well to any given project, however it's tough to apply as clearly / literally in the context of an organization that runs many projects at once, each of which having its own critical path. What's the meta critical path? Is there one?

Most people suck at presenting to big groups. It’s a shame because the ability to nail these presentations at key conferences can be once-in-a-lifetime opportunities to influence journalists, business partners, potential employees, customers and VCs.

So I thought I’d write a piece on how not to suck when you give a presentation.

Great article by Mark Suster, still on the topic of mastering simplicity in your product (a recurring theme on this blog of late):

Think about your experience at a restaurant with too many options. The owner thinks they are giving you the ability to have anything you want and you are thinking, “oy, vey, can’t you just give me a few well curated options?  The less you frequent the restaurant the more this is true. You’re not a master of what’s on the menu and you don’t want to invest the time to parse through all of its complexities. So you turn to the waiter and say, “What do you recommend?” or your order from the specials.

Yet the restaurant owners, chefs and waiters know every item on the menu by heart and wonder, “What’s the big deal? Just choose what you like!”

From http://www.bothsidesofthetable.com/2013/10/14/how-to-avoid-a-common-product-mistake/
I've seen this numerous times. You build something. To you, who spent the last days/weeks/months working on the intricacies of your product, everything's easy. To your users - not so much:

"- How can I get an XLS report for this data?"
"-It' simple really, just go to the administration, select the reports tab, search for the Excel export widget, click on the button to get the export options, tick the columns you want to export and you're done!"
"- Yeah, right... Can you say it again?"

Mark's advice is both sound and simple: "Design for the Novice, Configure for the Pro". Go read the article to see what exactly he means by this - it's worth it.
Medium is one of the two writing services I've been trying out lately, the other one being Quora. Both services aspire to encourage good writing and insightful contributions, although they don't go about it the same way.
The first thing I'd like to note is that Medium's rich text editor is the best I've seen in a browser so far. I've been involved in the discussions about how to make a rich text editor when we rebuilt XWiki's WYSIWYG editor from scratch, and a lot of difficult decisions had to be made. In the end, we went for a somewhat classic choice, with toolbars and such. Medium offers a clean break from this somewhat dated model.

One of the things I had pushed for at the time but that did not come to fruition were using an inline window to provide editing features, such as for links. Instead, we went for modal dialog boxes. While providing way less features (at least for now), Medium embraces full on this vision of offering the tools you need where you need them.
Highlight some text and you're offered to make it a heading or a link: 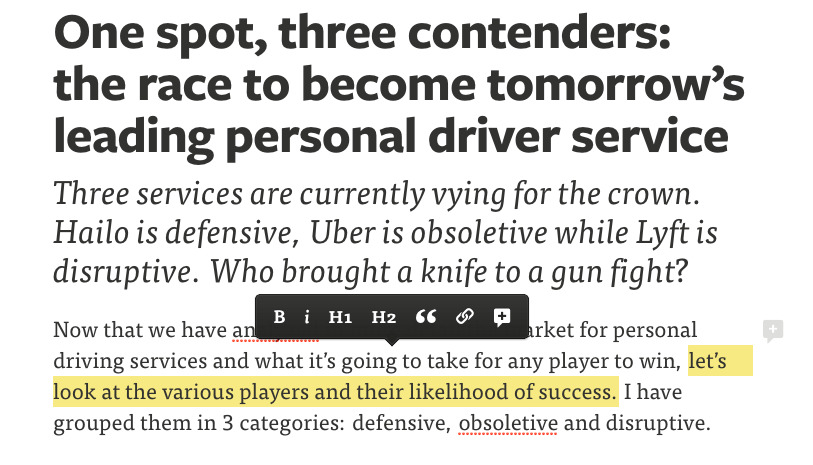 This is much better than the clumsy way Gmail now lets you deal with text editing in emails (oh, the back and forth with that dreaded bottom toolbar that keeps hiding all its features).

Hover over the side of the content and you're asked whether you'd like to insert an image: 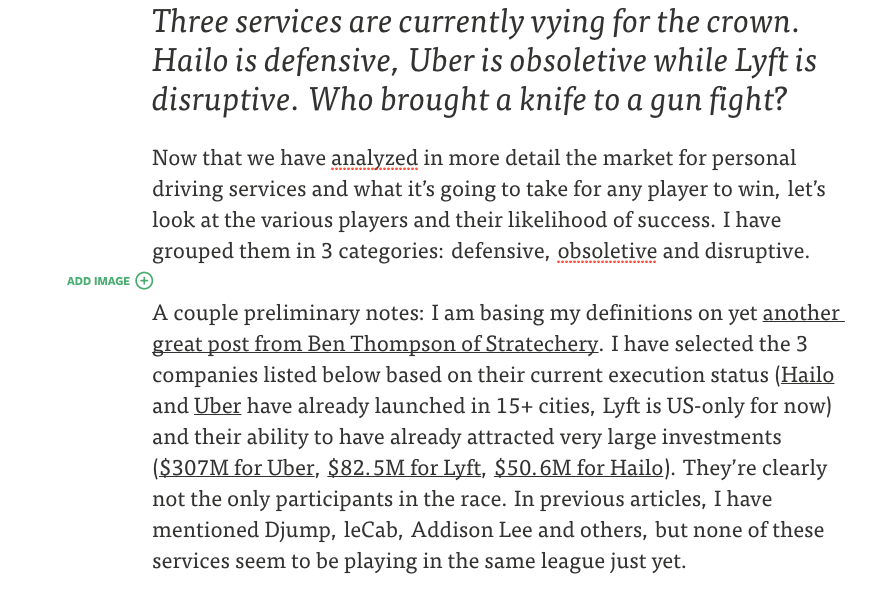 Simple, clean, efficient and out of the way when you don't need it.
Want to add an article for further reading? The button is available at the bottom of the post:

Also of note is the way the background and application chrome disappear when you're typing, letting you focus on your text. I had only seen this in desktop applications so far.

Other than that, I had a bit of a tough time figuring out how to setup a collection. I initially published in "On startups", a pretty crowded collection, before figuring out that I could also create a collection more focused on the topic at hand: https://medium.com/personal-driver-and-ride-sharing-services
I'm not quite sure how well Medium will fare in terms of promoting distribution of my content compared to Quora. Quora benefits from a large built-in audience and recommendation system ("related questions") which is less developed at Medium. However, Medium currently puts a limit on the number of authors it allows on the system and limits the onboarding of new writers.
While Quora let you see how many readers each question / answer has, Medium provides a simple dashboard to tell you how many views and how many times your articles have been read.
Neither service allow you to use tools such as Google analytics though.
Is Medium for you? Maybe, if you feel that the collection system will allow you to add interesting articles next to other writers. Probably not if you prefer posting on your own home on the web. Whatever your choice, Medium is fun to try for the strength of its rich text editor alone.