I read this article before going on holiday and didn't take the time to post about it:

Let's begin by looking at the overwhelming spiral. As your company grows, people start complaining about everything from your sales efforts being underwhelming to there not being enough organic snacks in your free food section. In the meanwhile, you are trying to wrestle serious product strategy questions posed by scary competitors to the ground. You don't know the answers to most of the complaints, so you defer them and focus on what you know. The problems related to the complaints fester and grow. Your employees get frustrated that the issues are not being fixed and complain louder. They begin to lose confidence in you as CEO.

The Best Defense is a Good Offense

The key to breaking the cycle is to stop feeling pressure and to start applying it. The most basic way to do this is to assign the problems to your team. This transfers the pressure from you to the organization and has the added benefit of empowering the team.

From http://www.bhorowitz.com/do_you_feel_pressure_or_do_you_apply_pressure
Although this is most definitely true at the organization-wide level, I found it to apply within a team as well. Forcing yourself to push things off your plate when you can't handle them is also a good way to give others a chance to shine and prove their worth by rising up to the occasion.
Very interesting article about conflicts in the workplace:
From http://qz.com/220340/the-surprising-secret-of-happier-more-productive-organizations-conflict/
This is something I've had a hard time understanding and accepting. For the longest time, I have been (and unfortunately still am) trying to avoid conflicting situations, mistaking them for a sign that something is going wrong.
The truth is, whether with colleagues, managers, clients (and even with your significant other!), conflicts can and should be a sign of a relationship moving forward in the right direction. One should not be afraid of getting into the right fights at the right times. Now let's practice what I preach and go argue with someone :-)
There are two conflicting takes on open source business models. The first one, exemplified below by Peter Levine, believes that there is no serious money to be made directly on open source projects. The optimist take, in the voice of Mike Volpi, outlines a strong opportunity for open source companies. As an employee and investor in XWiki SAS, an open source company, this subject rings close to home.

The success or failure of open source is not the software itself – it’s definitely up to the tasks required of it – but in the underlying business model.

Mike Volpi from Index Ventures comes out with pretty much with the opposite outlook on things:

At Index Ventures, we have been investing in open source for 12 years, and we’ve never seen such a “perfect storm” moment for open source companies to make the jump from scrappy-and-free to large-and-profitable. [...] it’s clear that the industry is finally ready to accept and value open source startups as real businesses poised for long-term growth.

Why — after decades of entrepreneurs trying to use free open source technology to build profit-generating companies — is now the breakout moment for billion-dollar open source companies?

From http://recode.net/2014/03/25/a-perfect-storm-moment-for-multibillion-dollar-open-source-companies/
What's your take?
I came across 2 cool XKCDs some time ago and never took the time to post them.
UPDATE 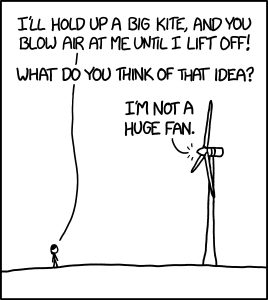 I've read 2 articles recently that touch on the impact of technology on everyday life and the political and societal implications this entails.

The first one is from Ludovic Dubost, my boss at XWiki (FR):

Nevertheless, I think that today we have still not seen the changes that technological innovation will have on society. The impact on the old economy is accelerating. New business models continue to emerge not only in the technology world but especially in the non-technological world. Innovations continue to arrive and things you never thought possible just 10 years ago are emerging today. [...]

These books say the same thing about technology. The possibilities offered by technology arrive sooner than we think and the changes to society and the economy are likely to be faster than society's ability to absorb sudden changes.

Ludovic makes the point that technological change will have and ever-increasing impact on society over the long term. No part of the economy is immune to change: technology will touch more and more parts of the economy, oftentimes with a negative effect for existing industries that are getting disrupted.

The second article is from Ben Thompson of Stratechery:

The ease of communication and distribution on the Internet is rendering vast swathes of the economy uncompetitive, even as certain sectors, companies, and individuals reap absolutely massive profits. I am by no means saying this is a bad thing, but I am certainly sympathetic to those who can no longer compete. I am also extremely concerned that recourse for these changes will increasingly be sought through the political process without tech having a seat at the table, much less a coherent solution for dealing with the human fallout of technological progress.

We as an industry absolutely need to wake up. SOPA, net neutrality, the Google bus protests – all of these are of a piece, and they are only the beginning. [...] The world is changing because we are changing it, just like we all wanted to, and now it’s time to grow up and deal with the consequences in a serious way. I truly hope that the fight for net neutrality will only be the beginning.

Ben takes the viewpoint of the tech industry: the industry will have to organize itself if it is to try and have influence over society's reaction provoked by the changes that society brings to our lives.

"Kurzweil’s point is that constant doubling, reflecting exponential growth, is deceptive because it is initially unremarkable. Exponential increases initially look a lot like standard linear ones, but they’re not. As time goes by—as we move into the second half of the chessboard—exponential growth confounds our intuition and expectations. It accelerates far past linear growth, yielding Everest-sized piles of rice and computers that can accomplish previously impossible tasks."

That yields all sorts of strange consequences. For example, in purely financial terms, there is probably at most one company in each YC batch that will have a significant effect on our returns, and the rest are just a cost of doing business. I haven't really assimilated that fact, partly because it's so counterintuitive.

This is related to the 2 previous points: most people are not really prepared to grasp the full meaning of "winner takes all" situations and the impact is has on society at large. Redistributive policies could be a way to balance out the need to motivate innovators while trying not to leave people on the side of the road.