From the interview Paul Graham did with The Macro:

Aaron : That’s the 30- and 40- years of software trauma that people are dealing with. Which is why I think people are still amazed every time something works. A little bit amazed.

Paul : You know what, though? I’ll tell you. The one real advantage of having a Ph.D. in computer science is you don’t blame yourself. Because you can say, “This is really hard and painful for me.” And instead of stopping at that point, you can say, “And I have a Ph.D. in computer science, so here’s an interesting data point. That means it’s probably too hard and painful for almost everyone,” right? Except the people who wrote it.

Aaron : Right. Because they know all of the quirks and all of the tricks, and they internalize that.

Paul : Yeah. Well, that’s why it’s really useful to go and watch your users use your stuff. If you build something for users, go and stand behind them. And my God, it is so hard to say, “Oh, no, don’t do that. Just click on that obvious button right in front of you. What are you doing?” It’s not so obvious.

Aaron : Why do you think people have such a hard time taking that step and actually going and spending time with their users?

Paul : I think because they think they know what their users are already like. And they don’t realize how different they are. And boy, let me tell you, direct marketers are very different from programmers.

When looking at people who are using your software the "wrong" way, it's just so hard resisting this impulse to reach out and tell them, "Don't do this! Do that instead!" - yet the best way to learn is to keep your mouth shut and keep observing. Taking a step back to put yourself in the shoes of your users is tough, but the benefits are worth it every step of the way.

I read "Traction" by Gabriel Weinberg and Justin Mares over the Christmas holidays. The book is full of interesting and relevant advice for startups looking to find and build an audience for their product. In short, they recommend going through a 5-steps process called the "Bullseye framework" in order to identify which distribution channel is the best for your company at a given point in time. The five steps are the following:

They go on to introduce the concept of "critical path": the key steps you have to follow in order to reach your traction goal. The key is to stay on the path until you've reached your goal: 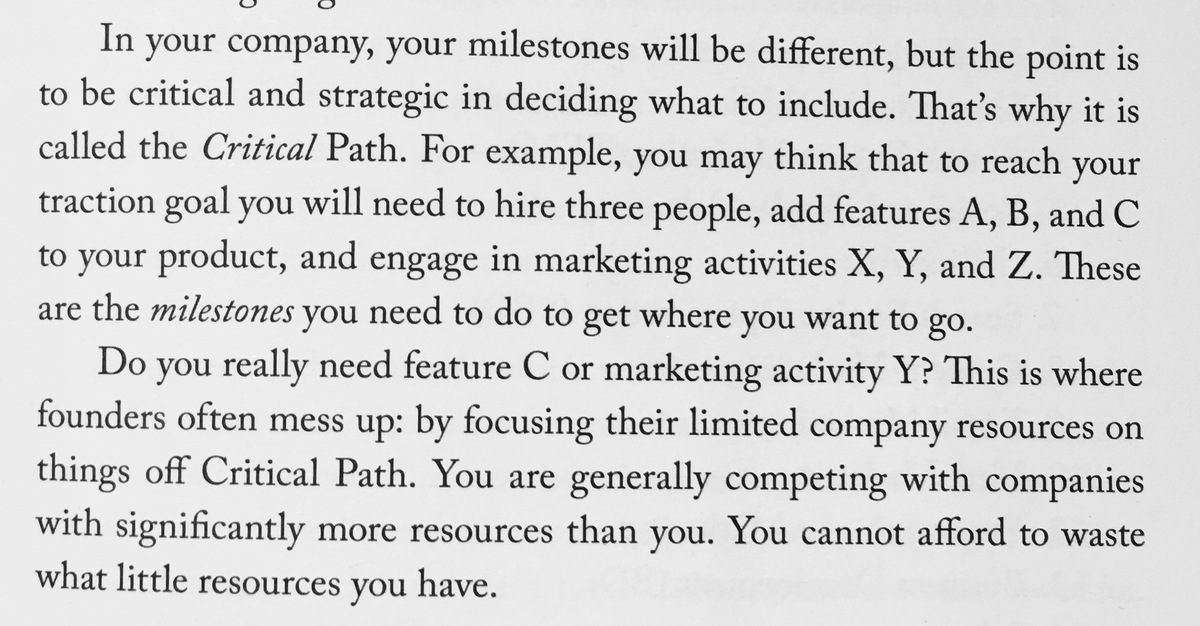 While I agree with this line of thinking, I've found it very difficult to apply it in practice. Forcing yourself to use one single channel is hard and triggers a lot of discussions: "Should we really stop going to events X and Y to do just online ads? Those events have been a big source of leads for us in the past!". In any case, forcing yourself to give a hard look at your various traction channels on a regular basis is an interesting and useful exercise. 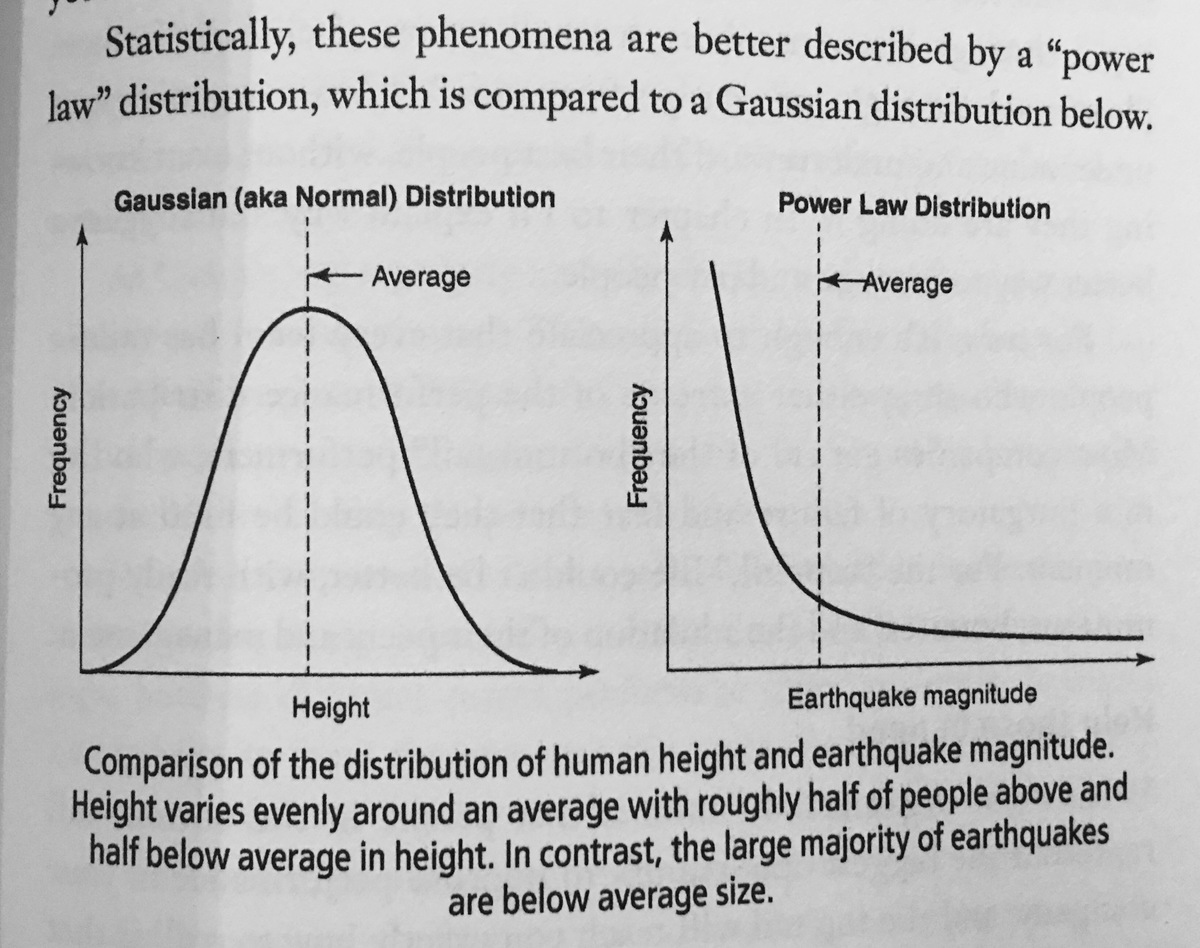 What's interesting is that I observed the same phenomenon taking place with content I've been posting to various online services. Incidentally, it's also something Paul Graham observed about startup investing:

The two most important things to understand about startup investing, as a business, are (1) that effectively all the returns are concentrated in a few big winners, and (2) that the best ideas look initially like bad ideas. 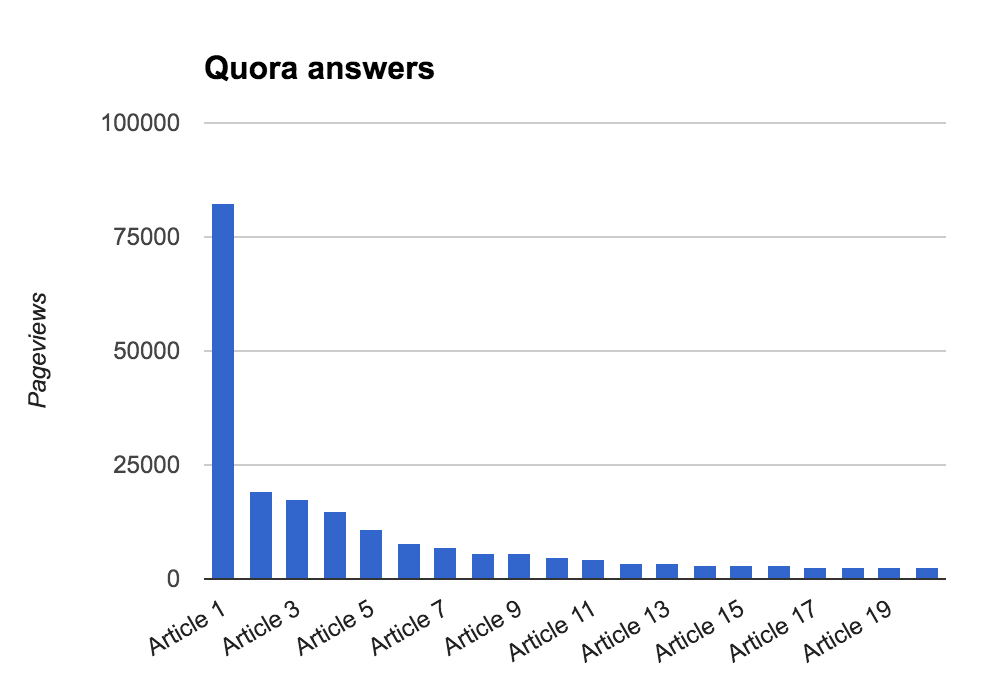 It's even worse on Slideshare (though the sample size is much smaller, only 7 presentations), where my top presentation strongly dominates the 6 others (note: same here, this graph does not show a power law distribution, it only illustrates the relative audience size for each presentation): 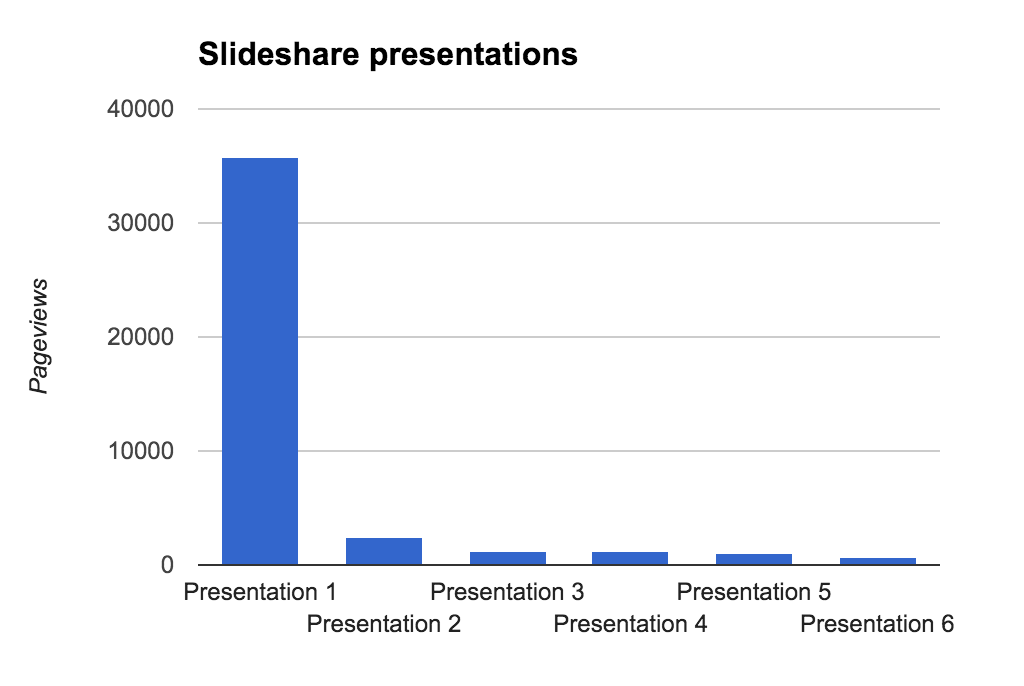 On a related note, most of the contact & consulting requests I receive come after someone saw that specific presentation.

What I find particularly enlightening is that I would most likely not have been able to predict in advance that a specific piece of content would resonate so much more than most others. In addition to this, online content can take a life of its own a long time after it was initially published. Case in point: my top Quora answer started getting a lot of views 18 months after I initially wrote it.

In "Traction", Nikhil Sethi shares an interesting piece of wisdom related to this:

Said differently, if you're trying to build an audience, it's important to publish new things on a regular basis, but also to invest as much as possible in your winners, since those are the pieces of content that are going to have the greatest ROI for you. That's counter-intuitive to most people. Says Paul Graham:

To succeed in a domain that violates your intuitions, you need to be able to turn them off the way a pilot does when flying through clouds. You need to do what you know intellectually to be right, even though it feels wrong.

Not all pieces of online content are born equal. Act accordingly! 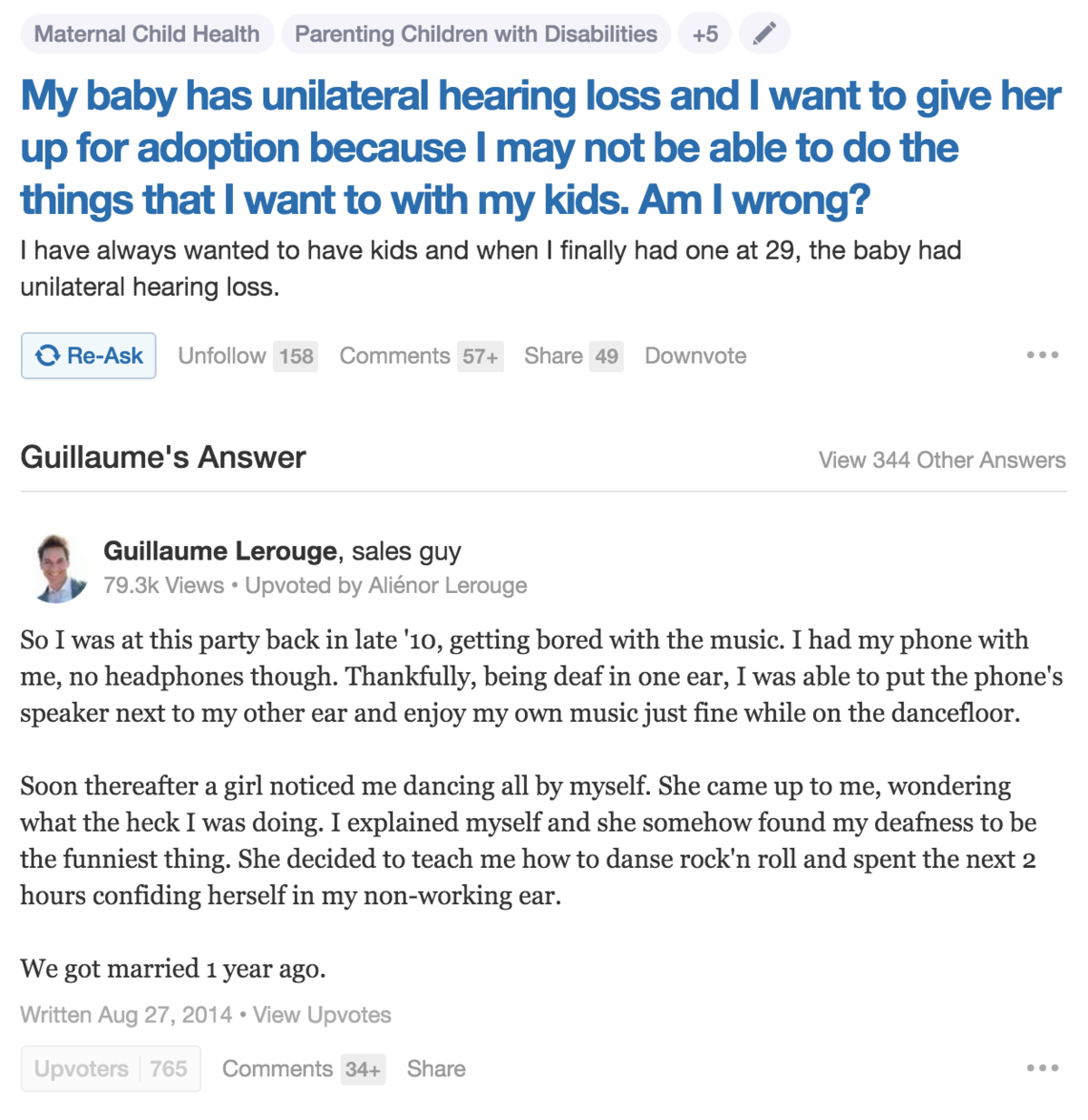 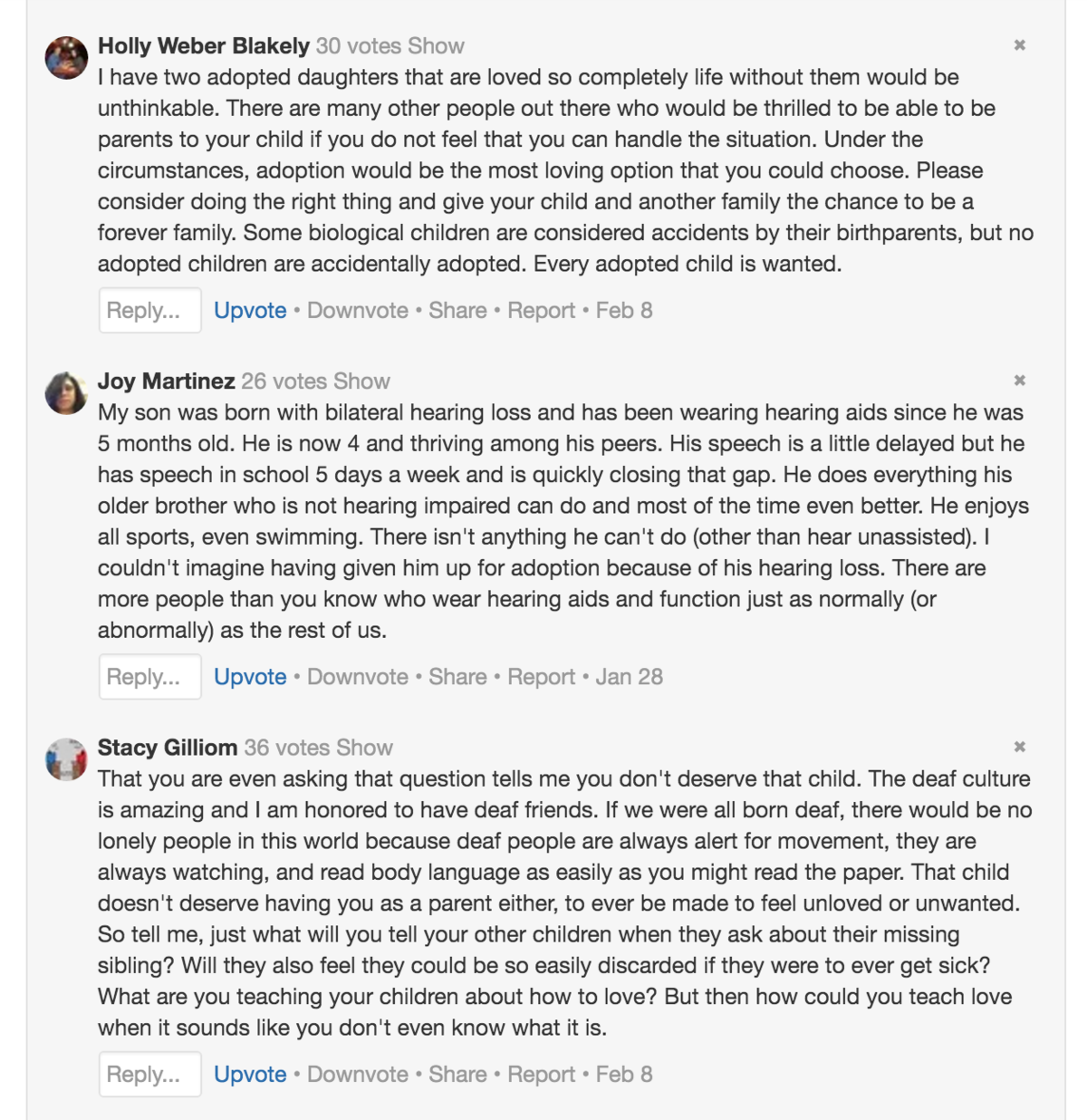 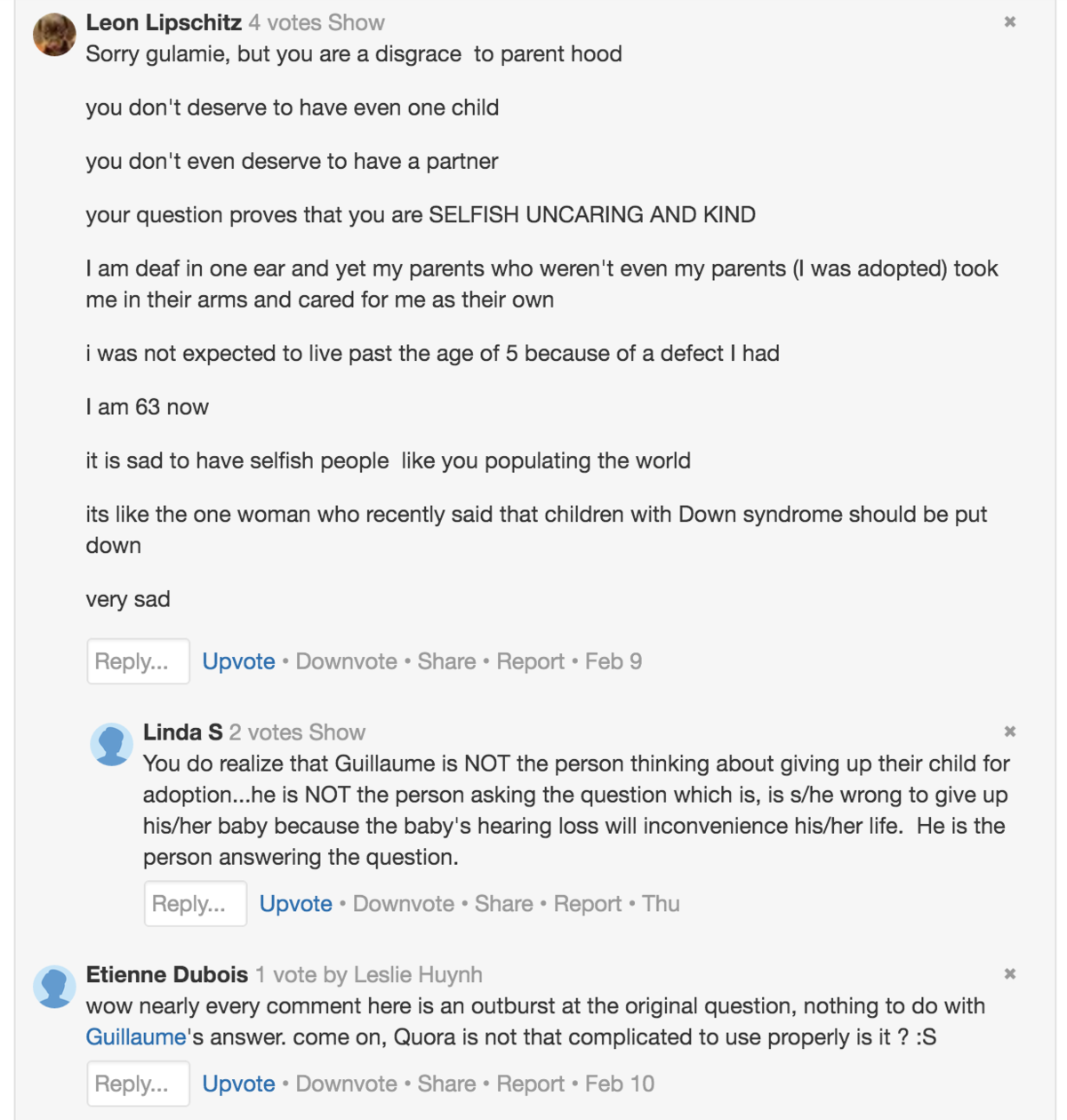 I've read a number of very interesting pieces about Elon Musk recently. Taken together, they try to explain who's Musk, why he's doing what he's doing and how he is able to accomplish everything he has. If you have a some (actually, a lot of) time during the week-end, I encourage you to go ahead and read them all!

First is this article by Nathan Kontny, aptly titled "The Scientist":

In 2004 at Burning Man, a yearly gathering in the Nevada desert, someone erected a 30 foot wooden pole with a dancing platform on top. Dozens of people failed to climb the pole. And then there's another who gives it his try. He doesn't look like someone who could climb it. And as he's trying, suspicions are confirmed. He's terrible and looks like he's about to fail. He hugs the pole the whole time as he squirms and inches his way up. With sheer determination he reaches the top of that platform. Who was he? Elon Musk.

Beyond the anecdote, there is a relentlessness to that man which can't help but impress. It is more fully explored in the 4-part articles on Wait But Why? (highly recommended read by the way), that review pretty much all of Elon's projects and how he's able to get them done:

For context, here's the introduction of Tim's first post:

Elon Musk, for those unfamiliar, is the world’s raddest man.

I’ll use this post to explore how he became a self-made billionaire and the real-life inspiration for Iron Man’s Tony Stark, but for the moment, I’ll let Richard Branson explain things briefly:

"Whatever skeptics have said can’t be done, Elon has gone out and made real. Remember in the 1990s, when we would call strangers and give them our credit-card numbers? Elon dreamed up a little thing called PayPal. His Tesla Motors and SolarCity companies are making a clean, renewable-energy future a reality…his SpaceX [is] reopening space for exploration…it’s a paradox that Elon is working to improve our planet at the same time he’s building spacecraft to help us leave it."

So no, that was not a phone call I had been expecting.

This guy is inspiring... and probably a bit frightening too :-)